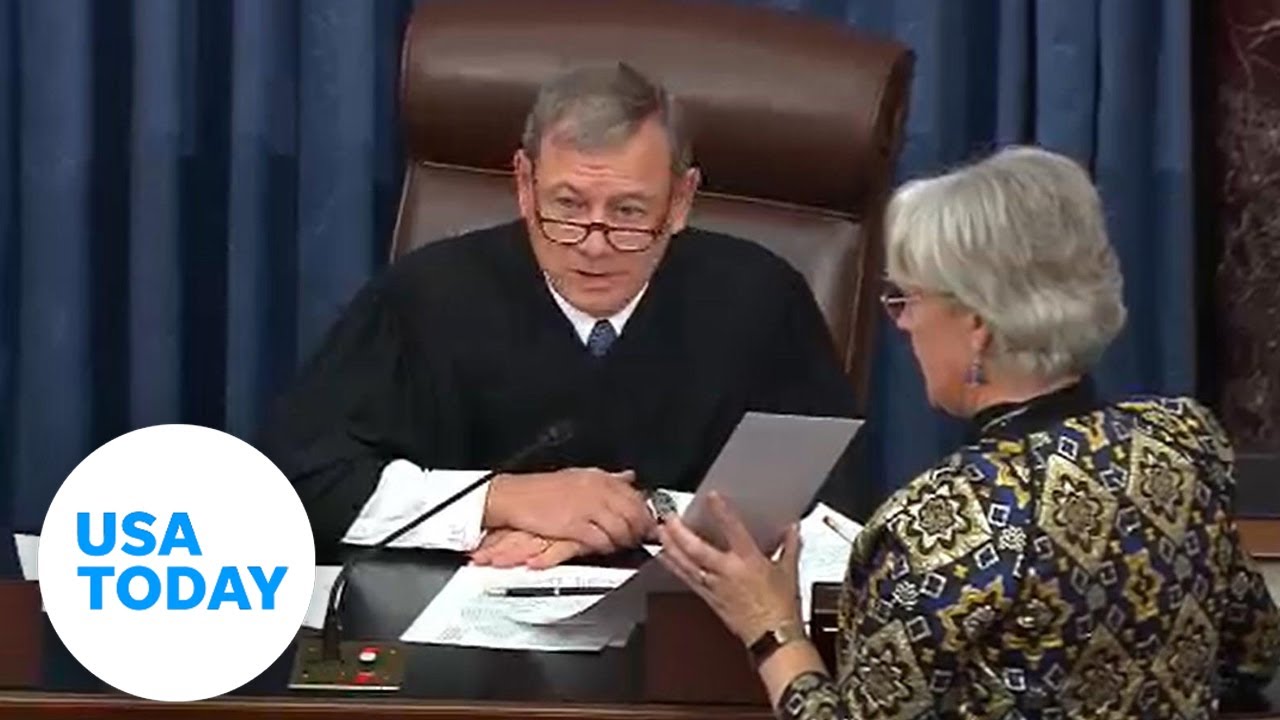 WASHINGTON –  As senators prepare for a pivotal day in the impeachment trial of President Donald Trump, The New York Times reported new alleged details about the president’s involvement in Ukraine.

In former national security adviser John Bolton’s upcoming book, he wrote that Trump asked him in May to make sure Ukrainian President Volodymyr Zelensky would meet with Trump’s personal lawyer Rudy Giuliani to talk about the investigations Trump wanted, the Times reported.

That request was made during an Oval Office meeting that included Giuliani, acting White House chief of staff Mick Mulvaney and Pat Cipollone, the White House counsel leading Trump’s defense team in the Senate impeachment trial.

The Times was first to report earlier that Bolton describes in the book how Trump said in August that he wanted to continue the suspension of $391 million in military assistance to Ukraine until the country helped investigate former Vice President Joe Biden and his son, Hunter.

Senators will vote today on whether to hear from Bolton or other witnesses. Bolton could contradict a key defense of Trump’s team: that there are no eyewitnesses to the allegation that Trump withheld military aid to Ukraine to get the country to investigate Democrats.

“No matter what the results of today’s vote, I believe the truth will eventually come out,” warned Senate Minority Leader Chuck Schumer, D-N.Y. “We could vote to see the truth in this trial, or it could come out in a few weeks or a few months. And on that day, every Republican who voted to hide the truth in an impeachment trial of the president, will have to answer for it.”

“I never instructed John Bolton to set up a meeting for Rudy Giuliani, one of the greatest corruption fighters in America and by far the greatest mayor in the history of NYC, to meet with President Zelensky. That meeting never happened.”

Sen. Sherrod Brown: GOP colleagues have ‘fear in their eyes’

For weeks, Republican senators have presented a largely unified front in public: President Donald Trump did nothing wrong regarding Ukraine and he should never have been impeached.

But Ohio Sen. Sherrod Brown said he senses something different behind closed doors: many are afraid to say anything critical.

“I’ve spoken to lots of Republicans, as my colleagues have, talking to them about this,” the Ohio lawmaker told reporters at a morning news conference. “We know what they say about this president in private. We know the fear in their eyes about voting against this president,”

Brown said he’s talked to his GOP colleagues about his concerns that acquittal will encourage Trump to become “unhinged,” and that he’ll continue engaging in “reckless” foreign policy and try to steal the 2020 election.

“I ask my colleagues and all they do is shrug,” he said. “They know better.”

At the same news conference, Senate Democratic Leader Chuck Schumer called Trump a “vindictive nasty president'” who goes after anyone who opposes him.

GOP Sen. Mike Enzi was only senator not to submit question

Only one senator decided not to submit any: Republican Mike Enzi of Wyoming.

There was no reason to, his spokeswoman Rachel Vliem responded in an email when asked why.

“Senator Enzi didn’t submit any questions because he felt that the questions he had were asked by his colleagues,” she wrote.

All eyes on Murkowski as decisions looms on witnesses

After three pivotal Republican senators indicated Thursday night whether they would vote to call witnesses in President Donald Trump’s impeachment trial, all eyes turned to another Republican, Sen. Lisa Murkowski.

And the Alaska senator was turning to Visine.

“I’m going to go back to my office and put eye drops in so I can keep reading,” Murkowski told reporters as she left the Senate, pointing to two volumes of notes she’d taken during the trial. “I’ve been forming a lot of thoughts so that’s going to be my job now at almost 11:00.”

Sen. Lamar Alexander, R-Tenn., had just announced that he would not join with Democrats in Friday’s vote on whether to extend the trial by issuing subpoenas for witnesses and documents.

“There is no need for more evidence to prove something that has already been proven and that does not meet the United States Constitution’s high bar for an impeachable offense,” Alexander said.

Two other key GOP senators – Maine’s Susan Collins and Utah’s Mitt Romney – had said they did want to learn more.

“I believe hearing from certain witnesses would give each side the opportunity to more fully and fairly make their case, resolve any ambiguities, and provide additional clarity,” Collins said.

Because a majority of the Senate sets policy in the trial, the 47 Senate Democrats need at least four of the 53 Republicans to support subpoenas to summon witnesses or seek documents, as House managers have urged.

If Murkowski votes for witnesses and no other senator crosses party lines, that would set up a 50-50 tie. It’s not clear whether Chief Justice John Roberts, who is presiding over the trial, would break the tie.

If Murkowski decides she’s heard enough, that likely sets up a 51-49 vote against witnesses.

Murkowski offered a hint about her thinking when she asked Trump’s defense team Thursday why the Senate shouldn’t call Bolton.

“This dispute about material facts weighs in favor of calling additional witnesses with direct knowledge,” Murkowski said in the written question, read by Roberts.

In an upcoming book, Bolton reportedly contradicts a key aspect of Trump’s defense argued by his lawyers in the Senate trial: that there are no witnesses who have linked Trump’s withholding of military aid to Ukraine to investigations of former Vice President Joe Biden, his son Hunter Biden or a debunked theory about Ukraine meddling in the 2016 U.S. election.

“It will do grave damage to this body as an institution to say that the proceedings in the House don’t have to really be complete,” Philbin said. “That’s not the way that this chamber should allow impeachments to be presented to it.”

Trump has denied telling Bolton that the Ukraine aid was tied to investigations but ordered him not to testify in the House’s investigation.

Secretary of State Mike Pompeo and Ukraine’s President Volodymyr Zelensky both insisted Friday that the impeachment of President Donald Trump had not soured U.S.-Ukraine relations.

“It seems to me it’s the other way around.  We have excellent relations between our countries,” Zelensky said during a joint news conference with Pompeo in Ukraine’s capital, Kyiv.

Pompeo described Ukraine as a “bulwark between freedom and authoritarianism in Eastern Europe,” but he demurred when asked if Trump would invite Zelensky to Washington for a coveted White House meeting.

“We’ll find the right time,” Pompeo said. “President Zelensky will be welcome to come to Washington when we have an opportunity to do good things for both the Ukrainian people and the American people. We’ll get it done.”

After his election last year, Zelensky sought a White House meeting as a show of U.S. support as Ukraine battles Russian aggression. Although Trump told Zelensky he would invite him, White House officials never gave Ukrainian officials a date.

In the article of impeachment charging Trump with abuse of power, House Democrats have accused Trump of using a White House visit and U.S. military assistance as leverage in his effort to coerce Zelensky into opening investigations into a political rival, former Vice President Joe Biden.

On Friday, Pompeo denied the Trump administration has set any conditions on Ukraine. And during his impeachment trial in the Senate, Trump’s defense lawyers have stressed that Zelensky had a personal meeting with Trump last fall as the Ukraine controversy was dominating headlines; the two leaders met on the sidelines of the U.N. General Assembly in New York.

The TV critic in chief has issued his review of his Senate impeachment trial.

Trump, a former reality television star, told Fox News’ Peter Doocy that he has watched “a little bit” of the trial.

Asked if he has any concern about the trial, Trump responded that he has “great confidence in the Republicans and the Republican Senate.”

“And I know they’re going to be fair,” Trump said.

The GOP controls the Senate, with a 53-47 advantage over Democrats in the chamber.

Report: Bolton encourages others to speak their truth

As the Senate gets ready to decide whether to hear from former national security adviser John Bolton in President Donald Trump’s impeachment trial, Bolton reportedly encouraged others who have served Trump not to be afraid to speak out.

Television station KXAN in Austin, Texas., reported that Bolton spoke at a private event there where he defended former diplomatic and state department officials who testified during the House impeachment inquiry.

Bolton also said that others should feel free to talk without retribution, the station reported. Testifying to what they think is true is the exact opposite of being destructive to the system of government, he reportedly said.

Bolton’s attorney has disputed that anything in the book “could reasonably be considered classified.”

Friday is shaping up to be judgment day for President Donald Trump.

The GOP-controlled Senate could wrap up the impeachment trial for Trump and acquit him, or decide to prolong the proceedings – possibly for weeks – by calling witnesses to testify. That would postpone a final vote on whether to remove him from office.

Thursday ended with the second round of questions being asked but with no certainty to how senators would vote on adding witnesses.

Defense line:Trump lawyer Dershowitz argues president can’t be impeached for an act he thinks will help his reelection

Democrats, who control 47 of the chamber’s 100 seats, have been trying to convince at least four Republican senators to join them in demanding Bolton and other administration witnesses appear to discuss the president’s conduct regarding Ukraine.

If Democrats fail, the third impeachment of a president in U.S. history will end like the previous two.

The House on Dec. 18 impeached Trump on two articles – abuse of power and obstruction of Congress – after hearings by the House Intelligence and Judiciary Committees into whether he tried to leverage the aid to Ukraine in exchange for digging up dirt on the Bidens.

The Senate trial began Jan. 21 with House Democratic lawmakers acting as prosecutors laying out the case against Trump over three days. Trump’s lawyers then began their defense of the president on Saturday and wrapped up Tuesday. As required by Senate rules, both sides – Republican and Democratic senators – were given a chance to pose follow-up questions to the Democratic House managers and Trump’s defense team on Wednesday and Thursday.

Trump has denied any wrongdoing, saying he had a duty to make sure any country receiving aid is meeting its obligations and that impeachment over this issue would weaken any president’s ability to carry out policy. His lawyers and political allies also say this impeachment effort lacks merit because no specific crime is being alleged.

Democrats contend Trump never cared about corruption in Ukraine until he saw Joe Biden emerge as the biggest threat to his 2020 reelection. The withholding of money in order to get Ukraine to announce the investigations and weaken Biden in the process is exactly the kind of “high crime” that the nation’s founding fathers were referencing when they created the impeachment mechanism.

Whatever the outcome, the process has left raw feelings on both sides of the aisle.