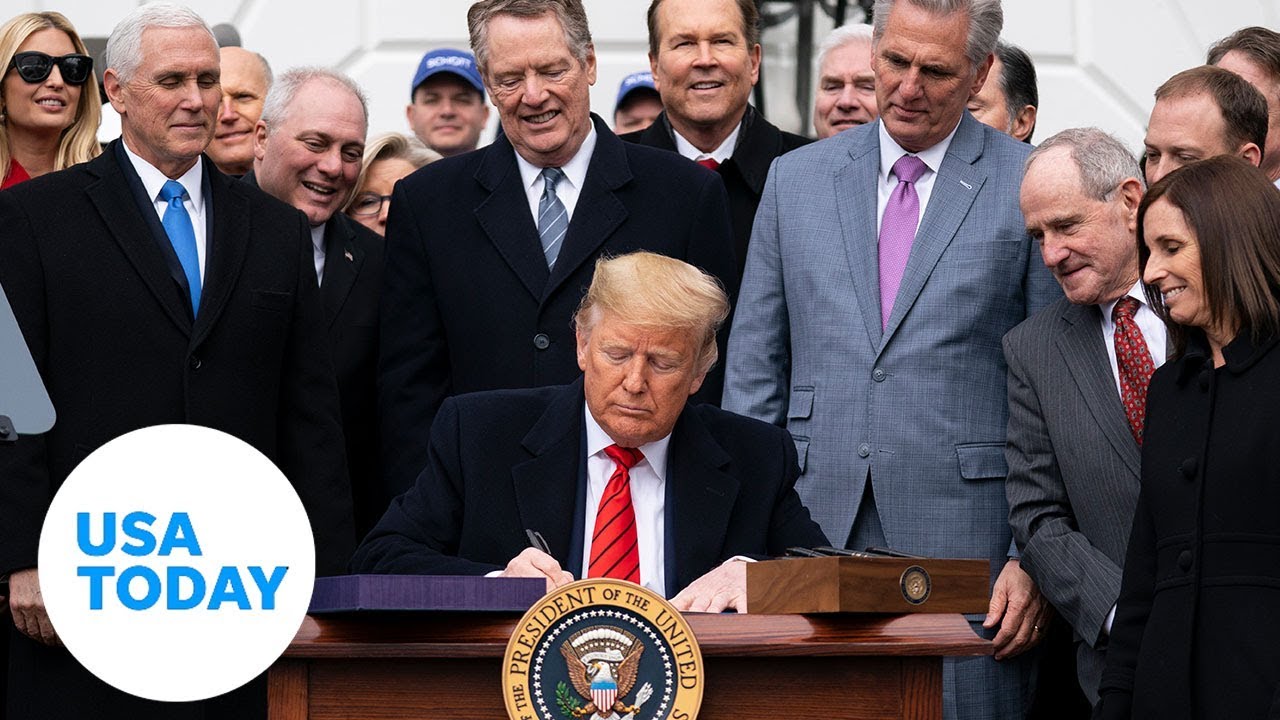 WASHINGTON – Still facing a divisive impeachment trial in the Senate, President Donald Trump celebrated a rare bipartisan achievement Wednesday when he signed into law a revamped trade deal with Mexico and Canada.

Surrounded by business leaders wearing hard hats, Trump portrayed the new U.S.-Mexico-Canada Agreement, or USMCA, as “a colossal victory” for American farmers, manufacturers and other workers.

“For the first time in American history, we have replaced a disastrous trade deal that rewarded outsourcing with a truly fair and reciprocal trade deal that will keep jobs, wealth and growth right here in America,” Trump said during a signing ceremony on the White House South Lawn.

Trump gave a shout-out to more than two dozen Republican lawmakers whom he credited with helping push the deal through Congress.

Left off of his list of plaudits and missing from the celebration: Congressional Democrats, who put their own stamp on the agreement and whose support was pivotal to helping it secure congressional approval. House Speaker Nancy Pelosi’s office said no Democrats were invited to the ceremony.

The revised trade deal, one of Trump’s top legislative priorities, is the product of months of negotiations and replaces the North American Free Trade Agreement, or NAFTA, which essentially eliminated tariffs on most goods traded among the three countries.

The agreement guarantees U.S. farmers greater access to Canada’s agriculture market and puts new e-commerce rules in place. It also dictates that a higher percentage of autos be made from parts manufactured in North America and requires that at least 40% of vehicle production be done by workers earning at least $16 per hour.

In addition, the pact, which is supported by labor unions and business groups, includes stronger provisions on labor, enforcement and pharmaceuticals that Democrats had sought as a condition for their approval of the agreement.

What’s in the deal?:From NAFTA to USMCA: Key changes on trilateral trade pact

For Trump, the revised deal marks a significant victory as he battles impeachment in the Senate and works to persuade voters to return him to office for another four years.

Trump relentlessly ridiculed NAFTA as the “worst trade deal ever” when he ran for president four years ago, arguing that it put American workers at a competitive disadvantage. Other critics, including Democrats, conceded NAFTA was outdated and needed to be revised.

Trump reopened trade negotiations with Mexico and Canada just four months after taking office and, after 13 months of talks, the sides struck the new deal. The revised pact passed the House last December and the Senate earlier this month with bipartisan support after House Democrats made some revisions.

More of the same?:‘NAFTA lite’: Trump and Democrats’ trade deal is similar to pact president mocked as ‘worst ever’

While Trump has signed the trade pact into law, it won’t be put into force for several months, said Daniel Ujzco, an international trade attorney in Ohio.

The next step is for all three countries to submit notice that they have met all of the requirements under the deal and develop uniform regulations that companies will use to comply with the agreement on a day-to-day basis.

The development of the regulations is “the most painstaking, yet most important, part of the process,” Ujzco said. The parties already have started working on the regulations, but some areas, such as new auto rules, will requirement significantly more work, he said.

The agreement could possibly be put into force in July, but given the amount work still to be done, the effective date could be pushed back until Labor Day, Ujzco said.

“Regardless of the actual date, this will be new reality for North American companies, and the time is now to focus on potential impacts,” he said. “We have moved past the politics and policy to the practicalities.”