As the deadly coronavirus continues to spread, Vietnam has begun blocking ships from making port calls.

Vietnam authorities stopped AIDAvita, a German ship, from making a port call. And Norwegian Cruise Line said Vietnam is closing its ports to cruise ships, which has forced the line to cancel the upcoming sailing of its Norwegian Jade cruise ship.

“Due to growing concerns regarding coronavirus in Asia, the ports we planned to visit in Vietnam are no longer open to accepting cruise ships,” Christine Da Silva, Norwegian Cruise Line spokesperson, said in an emailed statement to USA TODAY.

Instead of finding another port, Norwegian canceled the cruise altogether. Da Silva said that omitting Vietnam would change the itinerary on the ship’s sailing from Feb. 17-Feb. 27 and that there is “no viable replacement.”

And the itinerary of German ship, AIDAvita of AIDA Cruises, a subsidiary of the Carnival Corporation, has been changed after the ship was denied entry in Vietnam on Thursday.

“The port authorities of Cai Lan (Halong Bay) did not confirm the planned call of AIDAvita on February 13 and 14, 2020 in time as usual,” Kathrin Heitmann, a spokesperson for AIDA Cruises, said in an emailed statement to USA TODAY.

The ship had docked in Singapore, Malaysia and the Philippines, which all have had cases of coronavirus, the Vietnam News Agency told Reuters.

By midday Friday, Vietnam had reported 16 confirmed cases of coronavirus. The new coronavirus, which was first identified in Wuhan, China, has spread across the globe with more than 64,400 confirmed cases and the death toll rising above 1,380.

Instead of stopping in Vietnam, the ship was in Laem Chabang, Thailand, near Bangkok, on Friday, according to the cruise line.

AIDA Cruises said that there are no suspected or confirmed cases of coronavirus on board. And no guest or crew member had been in China in the previous 14 days. Heitmann said that the line was not given a reason as to why they were not allowed to dock.

However, AIDA Cruises has decided “in light of coronavirus in East Asia and the increasing travel restrictions” to end AIDAvita’s Asia and Australia cruise season along with the Asian season of another ship, AIDAbella.

AIDAvita’s cruise was meant to end in Bangkok and guests will disembark there on Sunday, according to the line. AIDAbella’s season will end on Monday. All guests will receive a refund and offered an alternative option.

MS Westerdam: No longer in limbo

It’s been an emotional ride for guests on board Holland America’s MS Westerdam. But now, the ship’s aimless journey has come to a close: Passengers began to disembark early Friday at the port of Sihanoukville, Cambodia, their detour the result of fears around coronavirus.

“The first passengers are off the Westerdam and headed home!” the U.S. Embassy in Cambodia tweeted early Friday local time. “We’re happy to greet them as they step onto dry land. Thank you to the government of Cambodia who helped this happen.”

The ship’s 1,455 passengers had been waiting for the all-clear from the Cambodian Health Ministry. After 20 samples were tested for coronavirus at the Pasteur Laboratory in Cambodia’s capital, Phnom Penh, passengers received permission to disembark.

Lorraine Oliveira, a passenger traveling from the U.K. on Westerdam with her family, told USA TODAY that they were able to get off the ship on Friday.

“We’ve been to the beach today,” she said. “It was amazing – so nice having our feet on land.”

Erik Elvejord, Holland America’s public relations director, said the process would take a few days, with the goal of having everyone off the ship by Sunday. The cruise originally was scheduled to end on Saturday.

The company was working to book return flights for passengers from Phnom Penh. In a tweet early Friday, the embassy told the ship’s U.S. passengers to look at the airport for personnel wearing blue hats with an American flag, who would assist them with their departure. 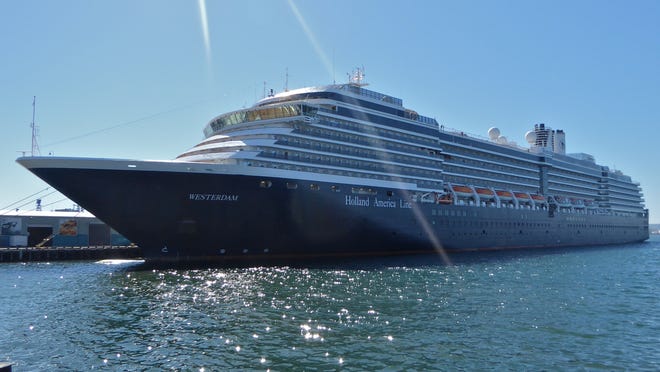 Coronavirus cases on Diamond Princess up to 218

Thursday brought mixed news for the passengers on the Diamond Princess, which has been quarantined off the coast of Yokohama, Japan, since Feb. 4. (It originally set sail on Jan. 20 with 2,666 guests and 1,045 crew.)

The bad news: Princess Cruises announced that an additional 44 cases had been diagnosed, bringing the total to at least 218. The sick have all been removed from the ship and taken to facilities onshore.

The good news: Princess announced early Thursday that Japanese health officials would facilitate the voluntary disembarkation of some guests, allowing them to complete the final three days of their 14-day quarantine at an onshore location.

The disembarkation will take place in phases. The most medically vulnerable passengers will be included in the first phase, including the elderly and those guests with pre-existing health conditions.

“According to officials, guests in the first group will be tested for the 2019 novel coronavirus,” Princess Cruises said in a statement provided by Negin Kamali, director of public relations. “If the test is positive, they will be transported to a local hospital for further evaluation and isolation. If the test is negative, they will be given the option to leave the ship and be transported to a quarantine housing facility.”

‘It’s day-by-day’:As coronavirus spreads on cruise ships, what does it mean for cruisers and cruise lines?